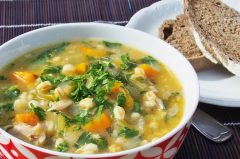 My favourite all time soup, is Chicken & Pearl Barley Soup.

It contains Pearl Barley, which I have added to our legume selection for this coming week.

This is the recipe:

8 to 10 small to medium chicken legs

A bunch of parsley, salt and pepper to taste

Saute the two large onions, then add the chopped celery, salt and pepper in a large soup pot.

Lightly pan fry the chicken legs in oil with salt and pepper. Remove chicken from pan, and remove the skin.

Add the chicken legs, chopped parsley and cooked pearl barley (1 to 1.5 cups) to the large soup pot which contains the sauted onions and celery.

Fill the pot up with water and chicken stock, bring to the boil, and simmer for 90 minutes.

Once cooked, remove the chicken legs and debone, adding the chicken meat back in the pot (also discard the grizzle from bones and give to pets)

* MAKE SURE you REMOVE the long thin chicken bone that runs parallel to the leg (so if you used 10 chicken legs, make sure to count the ten sharp bones)

Sounds a bit involved, but well worth the trouble

Have a good week.

See if we deliver in your area.

What Our Customers Say